To share your memory on the wall of Bob Jones, sign in using one of the following options:

Born in Anderson on August 28, 1943, he was a son of the late Robert Edward Jones and the late Mary... Read More
(Bob Jones) Robert “Bob” Jones, 77, husband of Brenda Jones of Anderson, died Monday, March 1, 2021 at AnMed Health Medical Center.

Born in Anderson on August 28, 1943, he was a son of the late Robert Edward Jones and the late Mary Sue Jones.

After serving in the U.S. Army from 1961-1964 in Germany, Bob was employed with Owens Corning Fiberglass in Anderson and retired from there with over 35 years service.

After retirement, he enjoyed his time hunting and fishing. He especially enjoyed camping at Edisto Beach, S.C. where he would spend all day fishing on the beach with his family and friends.

His favorite pastime was being with the ones who called him “Papa”, his grandchildren and great-grandchildren.

He is also survived by his brother, Jerry Jones and his sister, Jane Griffin.

To send flowers to the family or plant a tree in memory of Bob Jones, please visit our Heartfelt Sympathies Store.

Receive notifications about information and event scheduling for Bob Jones

We encourage you to share your most beloved memories of Bob Jones here, so that the family and other loved ones can always see it. You can upload cherished photographs, or share your favorite stories, and can even comment on those shared by others.

Brad &Bridget and Bobbi & Christian Bennett sent flowers to the family of Bob Jones.
Show you care by sending flowers

Guaranteed hand delivery by a local florist
B&

Posted Mar 04, 2021 at 09:21am
Please accept our most heartfelt sympathies for your loss... Our thoughts are with you and your family during this difficult time.

Posted Mar 03, 2021 at 09:50am
Brenda & Kristy, I am so sorry for your loss. Bob was a hardworking, dedicated husband, and loving family man. Chris and I are praying for your family

Posted Mar 02, 2021 at 08:31pm
This man was one of the few who accepted me for me. He always had a joke and a one of a kind smile. His pleasure was those close to him. Enjoying and sharing whatever he had. An honest man of integrity. I miss and will miss him. Bob Hale to Bob Jones, thanks for the memories I do cherish.
Comment Share
Share via:
PC

Posted Mar 01, 2021 at 10:07pm
Bob & Brenda Jones were the BEST neighbors I have ever had! Brenda & Kristi I am so sorry to hear of Bob's passing. May God bless you & thank you for all the memories made on Cloverhill Dr.
Comment Share
Share via:
DD

Brenda, Kristy, and family. it is with great sadness that we learned of Bob’s passing. Please accept our heartfelt condolences. Dennis and Donna Dooley (Paul’s parents) 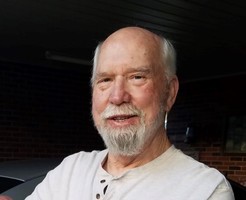