To share your memory on the wall of Rev. Ralph Tollison, sign in using one of the following options:

Provide comfort for the family by sending flowers or planting a tree in memory of Rev. Ralph Tollison

Provide comfort for the family by sending flowers or planting a tree in memory of Rev. Ralph Tollison

Born in Anderson on August 3, 1936, he was a son of the late King Silas Tollison and the late Jessie... Read More
Rev. Ralph Chandler Tollison, 84, husband of the late Vivian Campbell Tollison, died Sunday, December 27, 2020 at his home in Anderson.

Born in Anderson on August 3, 1936, he was a son of the late King Silas Tollison and the late Jessie Chandler Tollison.

Rev. Tollison was a 1955 graduate of Anderson Boy’s High School and a 1974 graduate of Anderson College, now Anderson University. He then went on to graduate from The Southwestern Baptist Theological Seminary in 1979. He pastored several churches in the states of South Carolina and Georgia in the 1970’s and 1980’s. Those churches include, Broadway Lake Baptist Church (Anderson, SC), Milltown Baptist Church (Hartwell, GA), Vesta Baptist Church (Carlton, GA), and Molena Baptist Church (Molena, GA). Rev. Tollison has also served as interim and supply pastor for several other congregations during his time in the ministry and ultimately retired in 1999. He was also a skilled carpenter and worked with his brothers in the home building industry. He had also worked as a delivery driver for Wometco Vending and for Anderson Tile Company. He was also a former fireman with the Hopewell Fire Department in Anderson County, SC.

The family will speak to attendees at the graveside immediately following the service.

Social distancing is to be observed and face masks are required.

To send flowers to the family or plant a tree in memory of Rev. Ralph Tollison, please visit our Heartfelt Sympathies Store.

We encourage you to share your most beloved memories of Rev. Ralph Tollison here, so that the family and other loved ones can always see it. You can upload cherished photographs, or share your favorite stories, and can even comment on those shared by others. 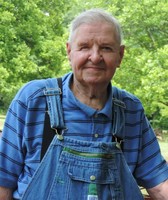