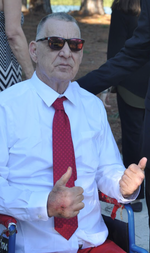 Wayne was the son of the late Pat LaMar and the late Olivia Alice Payne.

In addition to his parents, he was preceded in death by his brother William “Windy” Wingate LaMar.

He is survived by his only son, William Frederick LaMar, his daughter-in-law, Jessica Carrye LaMar, and grandson, Liam James LaMar. He is also survived by his two sisters, Carole Hurley and Chris Schork, along with his ex-wife, Hilda Jay Piper, and his longtime girlfriend, Ellie Lattman.

For over 20yrs, Woody owned and operated The Free Shuttle on the south end of Hilton Head where he lived and made thousands of friends and brought so much joy to many tourists and locals. His family was the most important thing to him closer to the end of his life. Weekly phone calls to his son and sisters brought so much joy to his final days.

He enjoyed relaxing evenings at home watching Iowa play football, listening to the birds and cars go by past the front porch, and spending time with his friends and family. Anyone that knew Woody knows that even when things weren’t going right that he was as he would say “totally awesome” and always having a huge smile on his face.

One thing that can be said about Woody is that when he loved you, he loved with his whole heart. He was a great friend to everyone he met. He was truly someone you wanted to have in your life and will be missed very much by all.

The family will host a celebration of life at a later date.

In lieu of flowers, memorials may be made to the following places: St. Luke’s Church, Holy Family Church, St. Andrews by the Sea, and Park Plaza Cinemas.

The Standard Cremation and Funeral Center is serving the LaMar family and a message of condolence may be sent to the family by visiting www.standardfuneralcenter.com.