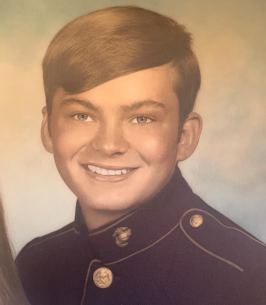 Tom was the epitome of a family man, there were no mountains he couldn’t or wouldn’t move for the ones he loved. He was an adoring husband to his wife, Louanne, for 49 years. Tom’s spirit was lively, always with a smile on his face and a warm greeting; he knew no strangers.

He lived a full life, beginning with his childhood, where he was one of seven siblings. In 1969, at 17 years old, Tom served three years in the Marine Corp during Vietnam. He was a proud Marine and was passionate about his country and fellow veterans. Tom & Louanne married in 1972 and began building their family.

In 1978, he began a career at Michelin and retired after nearly three decades of service. After retiring, Tom spent his time woodworking, tinkering in his barn, playing music, restoring his prized Volkswagens and spending time with his family. Out of all of Tom’s accomplishments, he would quickly tell you that his greatest one was being a husband & father.

In lieu of flowers, the family asks that donations be made to St Jude’s Hospital by visiting www.stjude.org.

The Standard Cremation & Funeral Center is serving the Glenn family and a message of condolence may be sent by visiting www.standardfuneralcenter.com.