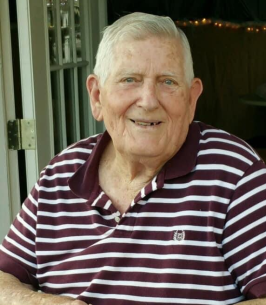 Born in Anderson, on March 6, 1927, he was a son of the late Roy Hall and the late Lillian Conwell Hall.

After serving in the U.S. Army, he started a career at Owens-Corning Fiberglas, and retired there after 34 years of service. He was a member of Pope Drive Baptist Church and thoroughly enjoyed working outside, doing yardwork, and helping his family with any project that needed his help. He also loved attending any event or ballgame that involved his grandchildren.

He is survived by his sons, Bruce Hall (Vicki), John Hall (Sharon), and Dwayne Hall (Tracie).

In addition to his parents, he was predeceased by his sons, Jack Randall Hall and Jeffrey Lane Hall, all his siblings, Douglas Hall, Betty Ann McClellan, and Billy Hall.

The family would like to express their sincere appreciation to the staff and residents of Station 3 at NHC Healthcare in Anderson. They, along with the staff of Caris Hospice, became an extended family to Jack during his time in their care.

A funeral service will be held at 12:00 noon, on Thursday, September 1, 2022, in The Tribute Room of The Standard Cremation & Funeral Center, 1621 Pearman Dairy Rd., Anderson, S.C. 29625. Pastor Steve Silvey will officiate, and burial, beside his wife, will follow at Old Silver Brook Cemetery.