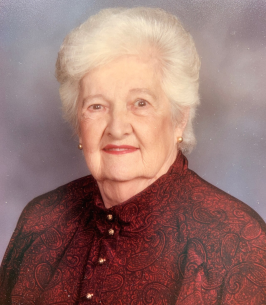 Born on September 14, 1924, she was one of the ten children of the late Thomas Crayton Simpson and the late Willie Skelton Simpson.

Ina was a 1942 graduate of the Anderson Memorial Hospital School of Nursing in Anderson, S.C. After graduation, she married her husband, Lt. Col. Orvil T. “Smitty” Smith. She traveled with him during his career in the U.S. Army until his death in 1959. That year, she embarked on a 25-year career with Wesley Long Hospital in Greensboro, N.C., where she was a nurse in the Intensive Care and Coronary Care units, respectively. She taught English as a second language, and also loved to do mission work, volunteering many hours of service in Greensboro and in the Gaza Strip with Baptists on Mission, a division of the North Carolina Baptist Convention. She was a member of Immanuel Baptist Church for over 60 years.

She is also survived by nine great-grandchildren.

In addition to her parents and husband, she was predeceased by her daughter, Cheryl Leonard, along with her six brothers and three sisters.

A graveside committal service will be at 12:00pm on Friday at Gilford Memorial Park in Greensboro.

In lieu of flowers, memorial donations may be made to Immanuel Baptist Church 2432 W. Gate Way City Blvd., Greensboro, N.C. 27403, or to the charity of one’s choice.