To share your memory on the wall of Dave Chapman, sign in using one of the following options:

Dave was the son of the late James Chapman and the late Ailene Kinard Chapman. In addition to his parents, he was preceded in death by his brothers D.J. Chapman, Frank Chapman, Edward Chapman; sisters Frances Chapman and Jessie Ruth Crain; stepsons Tim Willis and Danny T. Willis; and grandson Danny E. Willis.

Dave served in the U. S. Army and was a Mason. He worked for BASF for 28 years before his retirement in 1996. For many years he and his wife enjoyed camping with friends and attending Clemson Football games. He also loved spending time outdoors with his beloved dogs and was an avid hunter and fisherman. He was also a big NASCAR fan and rarely missed watching the races.

Dave will be fondly remembered by his family as a loving husband, father and grandfather, and will be greatly missed by all who knew him.

A graveside service will be held at 2:00 pm on Friday, March 19th at Forest Lawn Memorial Park in Anderson, SC. Reverend Jerry Nations will officiate. Social distancing is to be observed and face masks are required.

Family and friends may visit The Maple Room of The Standard Cremation & Funeral Center beginning Wednesday, March 17th at 2:00 p.m. until Thursday, March 18th until 5:00 p.m. to pay their respects and sign the register book.

A message of condolence may be sent to the family by visiting www.standardfuneralcenter.com.

Flowers are accepted or a memorial may be made to Haven of Rest Ministries, Anderson, SC.
Read Less

To send flowers to the family or plant a tree in memory of Dave Chapman, please visit our Heartfelt Sympathies Store.

Receive notifications about information and event scheduling for Dave Chapman

We encourage you to share your most beloved memories of Dave Chapman here, so that the family and other loved ones can always see it. You can upload cherished photographs, or share your favorite stories, and can even comment on those shared by others.

Nancy Byars and Linda Roper sent flowers to the family of Dave Chapman.
Show you care by sending flowers

Flowers were purchased for the family of Dave Chapman. Send Flowers

Posted Mar 18, 2021 at 12:19pm
Teresa and Cynthia, Our deepest condolences to you and your family. Let the memories of your fathers life provide you with the comfort you need during this challenging time. May God bless you with peace! With love and hugs, Jane Schneider and family.
Comment Share
Share via:
LR

Posted Mar 16, 2021 at 12:54pm
Wishing you peace to bring comfort, courage to face the days ahead and loving memories to forever hold in your hearts.

Flowers were purchased for the family of Dave Chapman. Send Flowers 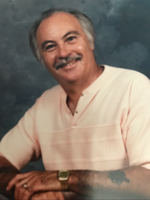